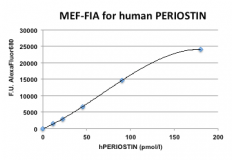 The FluoBolt™-PERIOSTIN immunoassay is a o.n, Metal Enhanced Direct Sandwich Fluorescence Immunoassay in 96-well plate format for the quantitative determination of PERIOSTIN in serum. The assay employs human based serum standards to ensure the measurement of biologically reliable data.

Principle of the Assay

The FluoBolt™-PERIOSTIN immunoassay is a o.n, Metal Enhanced Direct Sandwich Fluorescence Immunoassay in 96-well plate format for the quantitative determination of PERIOSTIN in serum samples. 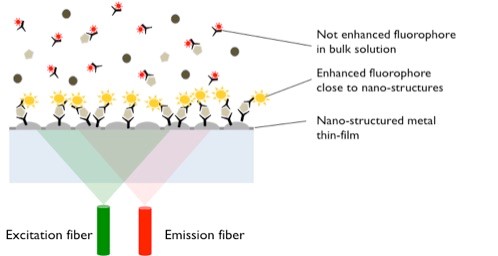 The signal of the bound fluorescent detection antibody is enhanced several hundred fold by the metal nano-structures at the plate bottom and thus highly sensitive detectable with a standard microtiter plate fluorescence reader. Measurements can either been done without washing (bottom measurement) or after a final washing step (top measurement). The concentration of Periostin in the sample is determined directly from the dose response curve.

The figure below shows a typical standard curve for the FluoBolt™- Periostin ELISA. The immunoassay is calibrated against recombinant full length Periostin: 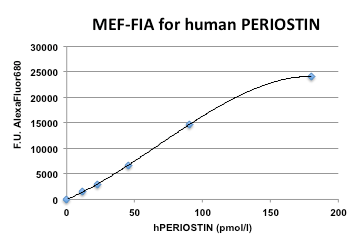 Storage instructions: All reagents of the human soluble neuropilin-1 ELISA kit are stable at 4°C until the expiry date stated on the label of each reagent.

Adding recombinant PERIOSTIN to serum and plasma resulted in 25% recovery in EDTA/Heparin-plasma and 80% in Citrate-plasma compared to serum (100%). This may be a result of the heparin and/or fibronectin binding properties of this molecule. Therefore we suggest to use only serum samples for optimal results. Collect venous blood samples by using standardized blood collection tubes for serum. We recommend performing serum separation by centrifugation as soon as possible, e.g. 10 min at 2000 x g, preferably at 4°C (2-8°C). The acquired serum samples should be measured as soon as possible. For longer storage aliquot samples and store at -25°C or lower. Do not freeze-thaw samples more than 4 times

In standard format, the kit is delivered with an AlexaFluor680 labeled detection antibody (FAA) because serum background fluorescence is minimal within this wavelength range. Therefore if your reader is equipped with monochromatic optics, please set Excitation/Emission to 679/702 nm or if you are using an optical filter based reader, select a suitable filter pair (e.g. 670/720 nm). On request the kit can also be delivered with FITC, Cy3 or Cy5 (Ex/Em = 495/518 nm, 550/570 nm or 650/670 nm) labeled detection antibody

Fluorescence intensity obtained by customers may differ due to various influences and/or due to the normal decrease of signal intensity during shelf life. However, this does not affect validity of results as long as the supplied kit controls read according to specifications (target ranges see labels)

Information on the Analyte

PERIOSTIN (UniProtKB - Q15063), also known as osteoblast specific factor 2 (OSF-2), is a cell adhesion protein belonging to the fasciclin domain-containing protein family. It consists of 836 amino acids (aa) starting with a 21 aa long signalling sequence, followed by a Emilin-like domain rich in cysteine, four repeated fasiclin 1 and a C-terminal variable domain, which is different among the 7 splice variants (isoforms) in humans.

PERIOSTIN is expressed during ontogenesis as well as in adult connective tissues submitted to mechanical stress such as bone, tendons, heart valves, skin and the periodontal ligaments. Further, it is expressed in aorta, stomach, lower gastrointestinal tract, placenta, uterus, thyroid and breast tissue. In bone, PERIOSTIN directly interacts with collagen type I, fibronectin, Notch 1, tenascin-C and BMP-1, resulting in enhanced proteolytic activation of lysyl oxidase for collagen cross-linking stabilising bone matrix. Next to developing, maintaining and repairing tissue, PERIOSTIN plays a vital role in tumorigenesis by interacting with various cell-surface receptors and signaling pathway, which e.g. results in inactivation of integrin- mediated signaling, leading to promoting cell adhesion and motility which is of relevance for tumor progression and metastasis. Elevated serum PERIOSTIN levels have been associated with pancreatic, ovarian, lung, breast, colon, gastric, thyroid and oesophageal tumours

To determine the sensitivity of the FluoBoltTM PERIOSTIN immunoassay, experiments measuring the Lower Limit of Detection (LOD) and the lower limit of quantification (LLOQ) were conducted.

The LOD, also called the detection limit, is the lowest point at which a signal can be distinguished above the background signal, i.e. the signal that is measured in the absence of PERIOSTIN, with a confidence level of 99%. It is defined as the mean back calculated concentration of standard 1 (0 pmol/l of PERIOSTIN, three independent measurements) plus three times the standard deviation of the measurements.

The LLOQ, or sensitivity of an assay, is the lowest concentration at which an analyte can be accurately quantified. The criteria for accurate quantification at the LLOQ are an analyte recovery between 75 and 125% and a coefficient of variation (CV) of less than 25%. To determine the LLOQ, standard 2, i.e. the lowest standards containing PERIOSTIN, is diluted, measured three times and its concentration back calculated. The lowest dilution, which meets both criteria, is reported as the LLOQ.

The following values were determined for the FluoBoltTM PERIOSTIN immunoassay:

The precision of an FluoBoltTM PERIOSTIN immunoassay is defined as its ability to measure the same concentration consistently within the same experiments carried out by one operator (within-run precision or repeatability) and across several experiments using the same samples but conducted by several operators at different locations using different FluoBoltTM PERIOSTIN immunoassay lots (in-between-run precision or reproducibility).

Within-run precision was tested by measuring the same samples 3 times within one FluoBoltTM PERIOSTIN immunoassay lot. The experiment was conducted by one operator. Samples reading above the highest standard were diluted with the sample diluent provided in the kit.

In-between-run precision was assessed by measuring the same samples 3 times within multiple FluoBoltTM PERIOSTIN immunoassay lots. The measurements were carried out by one operator.

The accuracy of an FluoBoltTM PERIOSTIN immunoassay is defined as the precision with which it can recover samples of known concentrations.

This table shows the summary of the recovery experiments in the FluoBoltTM PERIOSTIN immunoassay for serum samples. When using plasma samples, analytic recovery of the protein strongly varies depending on the amount and type of coagulant used. Therefore, we recommend to only use serum samples for PERIOSTIN analysis.

The figure and table below show the mean recovery and range of serially diluted recombinant PERIOSTIN in human samples. Linearty did not differ between human serum and plasma :

This assay detects human PERIOSTIN. Addition of recombinant TGF-β1 or BMP-1, which are considered to be binding to PERIOSTIN, to the standards supplied with this kit did not reduce signal intensity.

Human PERIOSTIN shares around 98-99% aa sequence identity with higher apes (e.g. gorilla or chimpanzee), 95% with bovine/ equine and 91% with mouse PERIOSTIN. Reactivity of this assay with other species than human has not been tested. So using this assay for PERIOSTIN measurements in serum of species with high sequence homology may be possible, but must be evaluated by the user.

The stability of endogenous PERIOSTIN was tested by incubation of clinical samples at room temperature for a specific period of time and by subjection samples to repeated freeze / thaw cycles.

For freeze-thaw experiments, samples were collected according to the supplier’s instruction using blood collection devices and stored at -80°C. Reference samples were freeze-thawed once. The mean recovery of sample concentration after five freeze-thaw cycles is 84%.

Samples can be freez/thawed for at least three times.

To provide expected values for circulating PERIOSTIN, a panel of samples from a collection of blood donors (aged 18-69 years) was tested.

No dependency on age, or sex was found.

Adding recombinant PERIOSTIN to serum and plasma resulted in 25% recovery in EDTA/Heparin-plasma and 80% in Citrate-plasma compared to serum (100%). This may be a result of the heparin and/or fibronectin binding properties of this molecule. Therefore we suggest to use only serum samples for optimal results.

Powered by BizGenius
Reviews
Reviews
Sort by:
Submit a Review