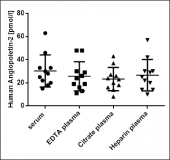 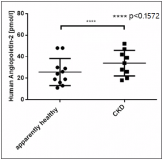 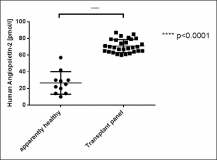 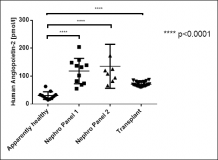 The Angiopoietin 2 ELISA kit is a 3.5 h, 96-well sandwich ELISA for the quantitative determination of Angiopoietin-2 in human serum, plasma, urine and cell culture supernatant.

The human Angiopoietin 2 ELISA kit is a sandwich enzyme immunoassay for the quantitative determination of Angiopoietin-2 in human serum, plasma, urine and cell culture supernatant.

The figure below explains the principle of the human Ang-2 sandwich ELISA:

In a first step, pre-diluted standard/control/sample and biotinylated antibody (goat polyclonal anti-human Angiopoietin-2) are pipetted into the wells of the microtiter strips, which are pre-coated with a monoclonal anti-human angiopoietin-2 antibody. Angiopoietin-2 present in the standard/control/sample binds to the pre-coated antibody in the well and forms a sandwich with the anti-human Angiopoietin-2 antibody. In a washing step all non-specific unbound material is removed. In a second step, the conjugate (Streptavidin-HRP) is pipetted into the wells and reacts with the biotinylated antibody. After another washing step, the substrate (TMB, tetramethylbenzidine) is pipetted into the wells. The enzyme-catalyzed color change of the substrate is directly proportional to the amount of Angiopoietin-2 present in the sample. This color change is detectable with a standard microplate reader. A dose response curve of the absorbance (optical density, OD at 450 nm) using the values obtained from the standards versus the standard concentration is generated. The concentration of Angiopoietin-2 in the sample is determined directly from the dose response curve.

The figure below shows a typical standard curve for the Ang-2 ELISA. The immunoassay is calibrated against recombinant human Angiopoietin-2 protein:

Storage instructions: all reagents of the Angiopoietin-2 ELISA kit are stable at 4°C (2-8°C) until the expiry date stated on the label of each reagent.

Serum, EDTA plasma, heparın plasma, citrate plasma, urine and cell culture supernatant are suitable for use in this human Ang2 ELISA kit. Do not change sample type during studies. We recommend duplicate measurements for all samples, standards and controls. The sample collection and storage conditions listed are intended as general guidelines.

Collect venous blood samples in standardized serum separator tubes (SST) or standardized blood collection tubes using EDTA, heparın or citrate as an anticoagulant. For serum samples, allow samples to clot for 30 minutes at room temperature. Perform separation by centrifugation according to the tube manufacturer’s instructions for use. Assay the acquired samples immediately or aliquot and store at -25°C or lower. Lipemic or haemolyzed samples may give erroneous results. Samples are stable for four freeze-thaw cycles. Thawed samples should be assayed as soon as possible.

Note: the experiments performed to measure Angiopoietin-2 in urine samples did not undergo a full validation according to FDA/ICH/EMEA guidelines. However, our performance check suggests that urine samples can be measured with this ELISA.

Aseptically collect the first urine of the day (mid-stream), voided directly into a sterile container. Centrifuge to remove particulate matter, assay immediately or aliquot and store at -25°C or lower. Do not freeze-thaw samples more than four times. Thawed samples should be assayed as soon as possible.

Remove particulates by centrifugation and assay immediately or aliquot and store samples at -25°C or lower. Do not freeze-thaw samples more than four times. Thawed samples should be assayed as soon as possible.

Reconstituted STDs and CTRLs are stable -25°C or lower until expiry date stated on the label and can be subjected to up to three freeze-thaw cycles.

Bring samples to room temperature and mix samples gently to ensure the samples are homogeneous. We recommend duplicate measurements for all samples.

Samples with values above STD7 (400 pmol/l) after pre-dilution can be diluted further with ASYBUF (Assay buffer).

Read the optical density (OD) of all wells on a plate reader using 450 nm wavelength (correction wavelength 630 nm). Construct the standard curve from the OD values of the STD. Use commercially available software or graph paper. Obtain sample concentration from this standard curve. The assay was evaluated with 4PL algorithm. Different curve fitting methods need to be evaluated by the user.

If required, the pmol/l concentration can be converted into pg/ml by applying a conversion factor (1 pg/ml = 0.018 pmol/l; MW: 54.9 kDa). Respective dilution factors have to be considered when calculating
the final concentration of the sample.

The quality control protocol supplied with the kit shows the results of the final release QC for each kit at production date. Data for OD obtained by customers may differ due to various influences including the normal decrease of signal intensity throughout shelf life. However, this does not affect validity of results as long as an OD of 1.5 or higher is obtained for the standard with the highest concentration and the control value is in range (target range see label).

Angiopoietin-2 (ANG2) is a 56.9 kDa glycosylated growth factor that is specific for endothelial cells (ECs). ANG2 is expressed in embryonic vessels and contributes to the formation of new vasculature. In adults, it is restricted to sites of vascular remodeling (e.g. ovary, uterus, placenta) and wound healing. ANG2 is regulated by the cytokine vascular endothelial growth factor (VEGF). Together with VEGF, ANG2 induces endothelial cell migration, proliferation, and vascular sprouting. During angiogenesis, ANG2 exerts its effects via the angiopoietin-1/TIE2 receptor signaling system on endothelial cells. Disruption of this signaling leads to the loss of endothelial integrity. In consequence, the endothelium responds to various pro-inflammatory cytokines and growth factors. Thus, ANG2 might cause vascular micro-inflammation in patients with chronic kidney disease (CKD). Various studies demonstrated that ANG2 levels increase with CKD stage and are associated with fluid overload and abnormal cardiac structure. Furthermore, ANG2 concentrations correlate with mortality in patients with CKD stages 4–5. Although ANG2 levels recover after successful kidney transplantation, ANG2 continues to be a cardiovascular risk factor in this population.
In cancer, targeting the TIE2-Angiopoietin pathway has shown promising results in some pre-clinical and clinical trials, including studies on recurrent or metastatic breast and renal cell carcinomas.

In COVID-19 patients, ANG2 was recently reported to be a relevant factor to predict transfer to the ICU as it was associated with poor lung compliance. Thus, showing that endothelial activation reinforces the hypothesis of a COVID-19-associated microvascular dysfunction. In this context, another study demonstrated that ANG2 levels in critically ill COVID-19 patients correlate with disease severity, hypercoagulation, and mortality. The researchers also provided novel in vivo evidence for a direct role for ANG2 in coagulation through binding to and inhibition of thrombomodulin-mediated anticoagulation. The scientists suggest that inhibition of ANG2 might be beneficial for treating critically ill COVID-19 patients, as well as other patients with hypercoagulation.

The LOD, also called the detection limit, is the lowest point at which a signal can be distinguished above the background signal, i.e. the signal that is measured in the absence of Angiopoietin-2, with a confidence level of 99%. It is defined as the mean back calculated concentration of standard 1 (0 pmol/l of Angiopoietin-2, five independent measurements) plus three times the standard deviation of the measurements.

The LLOQ, or sensitivity of an assay, is the lowest concentration at which an analyte can be accurately quantified. The criteria for accurate quantification at the LLOQ are an analyte recovery between 75 and 125% and a coefficient of variation (CV) of less than 25%. To determine the LLOQ, standard 2, i.e. the lowest standard containing Angiopoietin-2, is diluted, measured five times and its concentration is back calculated. The lowest dilution, which meets both criteria, is reported as the LLOQ.

The following values were determined for the Angiopoietin-2 ELISA:

Within-run (intra-assay) precision was assessed by measuring two samples of known concentrations three times within one Angiopoietin-2 ELISA kit lot by one operator.

The tables shows the summary of the recovery experiments in the human Angiopoietin-2 ELISA in human samples:

The table below shows the mean recovery and range of serially diluted recombinant Angiopoietin-2 :

The table below shows the mean recovery and range of serially diluted endogenous Angiopoietin-2 in human samples:

This assay recognizes endogenous and recombinant human Angiopoietin-2. According to epiptope mapping and sequence analysis Angiopoietin-2 ELISA should detect all 3 isoforms. Angiopoietin-1 is not detected in this assay.

Antibody binding sites were determined by epitope mapping using microarray analysis (Pepperprint GmbH). The capture antibody shows no linear epitope, but has a structural epitope which binds to receptor binding site of human ANG2. This receptor binds to TEL/TIE2 protein. The detection antibody binds to several epitopes distributed over the entire Angiopoietin-2 molecule. 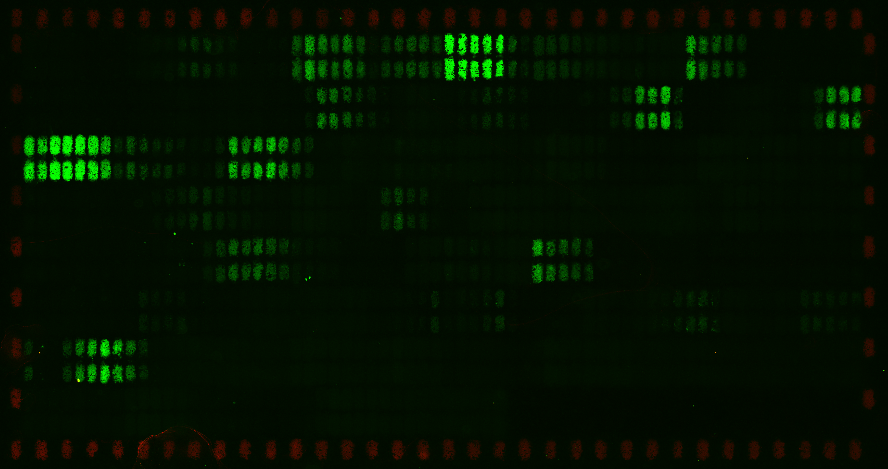 Microarray of polyclonal detection antibody reveals seven linear epitopes on human ANG-2 sequence. Fluorescent signals (green) illustrate where the antibody binds to peptide sequences on a microarray chip. These peptides were spotted as 15mers with an 13 amino acid overlap in duplicates on the chip and represent the whole human Angiopoietin-2 sequence. Red fluorescent signals mark the position of control peptides 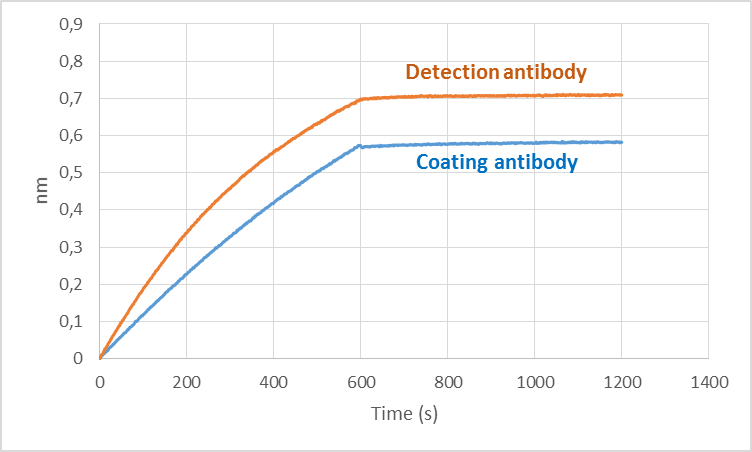 SWISS model of human Angiopoietin-2 monomer (122-493 aa, O15113/ 3ghg.1.B) with antibody epitopes. The monoclonal coating antibody binds to the bioactive receptor-binding site within the C-terminus (structural epitope, blue). Linear epitopes (purple) of the detection antibody range over the whole protein. The N-terminus and three additional epitopes are not shown here.

Competition experiments were carried out by pre-incubating human samples containing endogenous levels of Angiopoietin-2 with an excess of capture antibody (CAB). The concentration measured in this mixture was then compared to a reference value, which was obtained from the same sample but without the pre-incubation step. Mean competition was 87%, and is within the range of acceptance of international guidelines.

According to epiptope mapping and sequence analysis Angiopoietin-2 ELISA should detect all 3 isoforms. Angiopoietin-1 is not detected in this assay.

Angiopoietin-1 is not detected in this assay.

Serum, EDTA plasma, heparın plasma, and citrate plasma are suitable for use in this assay. Do not change sample type during studies. We recommend duplicate measurements for all samples, standards and controls. The sample collection and storage conditions listed are intended as general guidelines.

The stability of endogenous Angiopoietin-2 (ANG2) was tested by comparing four measurements in samples that had undergone four freeze-thaw cycles (F/T).

For freeze-thaw experiments, samples were collected according to the supplier’s instruction using blood collection devices and stored at -80°C. Reference samples were freeze-thawed once. The mean recovery of sample concentration after four freeze-thaw cycles is 94%.

All samples should undergo a maximum of four freeze-thaw cycles.

The benchtop stability of endogenous Angiopoietin-2 was tested by comparing Angiopoietin-2 measurements in human samples that had been stored at different temperatures.

For the assessment of the benchtop stability, a set of undiluted human samples was aliquoted and stored at at room temperature or at 4°C. Samples can be stored for at least three hours at room temperature as well as overnight at 4°C. The mean recovery of sample concentrations after overnight storage at 4°C is 93%.

Angiopoietin-2 concentrations of samples stored at -25°C (reference), at room temperature (RT) or overnight (oN) at 4°C:

To provide values for circulating Angiopoietin-2 (ANG2), a panel of samples from apparently healthy donors was tested. Each individual donated blood for all tested sample matrices. 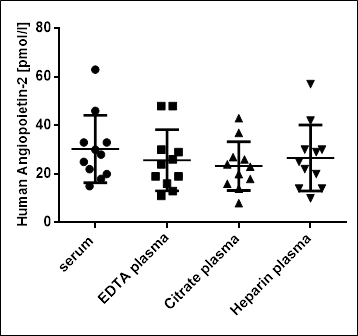 It is recommended to establish the normal range for each laboratory.

Summary of the results obtained with several disease panels: 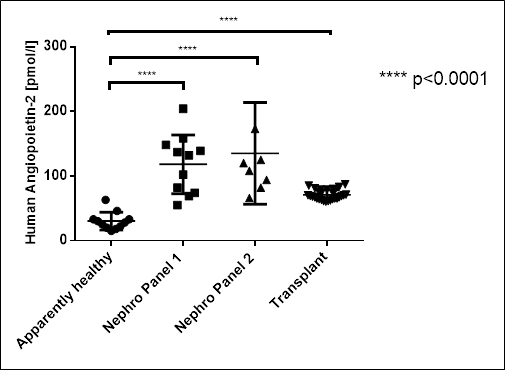 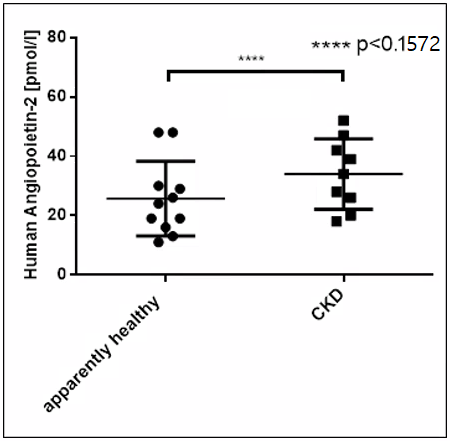 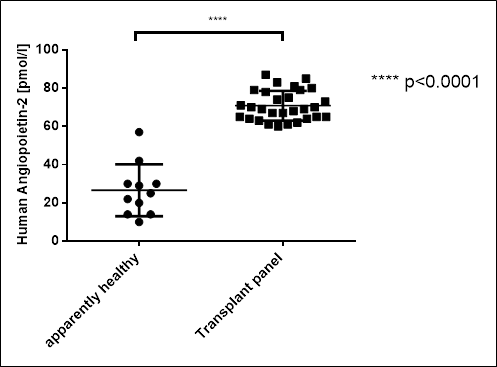 To assess whether all tested matrices behave the same way in the Angiopoietin-2 (ANG2) ELISA, concentrations of ANG2 were measured in serum, EDTA, heparın, and citrate plasma samples prepared from 11 apparently healthy donors. Each individual donated blood in all tested sample matrices.

Data and graph for apparently healthy donors are shown below: 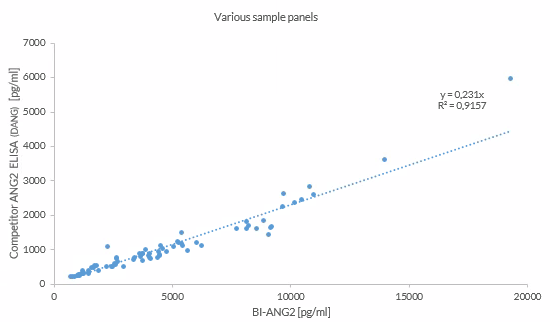