The mouse/rat Angiopoietin-2 ELISA kit is a 5.5 h, 96-well sandwich ELISA for the quantitative determination of Angiopoietin-2 in mouse and rat serum and plasma.

In a first step, pre-diluted standard/control/sample are pipetted into the wells of the microtiter strips, which are pre-coated with a recombinant monoclonal Angiopoietin-2 antibody. Angiopoietin-2 present in the sample binds to the pre-coated antibody in the well. After a first wash step, which removes non-specifically unbound material, detection antibody is added and forms a sandwich with the antigen bound on the plate. After another washing step the conjugate (streptavidin-HRP) is pipetted into the wells and reacts with the detection antibody. After another washing step, the substrate (TMB, tetramethylbenzidine) is pipetted into the wells. The enzyme catalysed color change of the substrate is directly proportional to the amount of mouse/rat Angiopoietin-2 present in the sample. This color change is detectable with a standard microtiter plate ELISA reader. The concentration of Angiopoietin-2 in the sample is determined directly from the dose response curve. 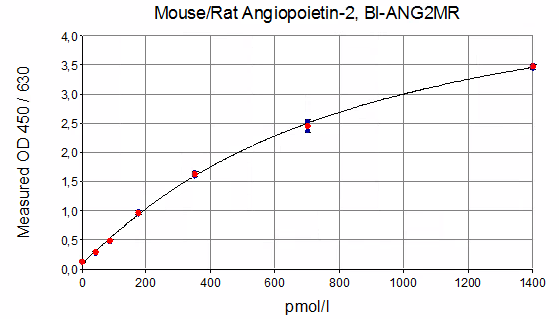 Storage instructions: all reagents of the Angiopoietin-2 Mouse/Rat ELISA kit are stable at 4°C (2-8°C) until the expiry date stated on the label of each reagent.

Serum and plasma are suitable for use in this Ang2 ELISA kit. We recommend duplicate measurements for all samples, standards and controls. Do not change sample type during studies. The sample collection and storage conditions listed are intended as general guidelines.

Collect venous blood samples by using standardized blood collection tubes for serum or plasma. Perform serum and plasma separation by centrifugation according to supplier’s instructions of the blood collection devices and measure the acquired serum or plasma samples as soon as possible. For longer storage aliquot and store samples at -25°C or lower. Samples are stable for at least four freeze-thaw cycles. Thawed samples should be assayed as soon as possible. Lipemic or haemolyzed samples may give erroneous results.

Samples with values above STD7 (1400 pmol/l) can be diluted with ASYBUF (Assay buffer).

Serum and plasma are suitable for use in this assay. Do not change sample type during studies. 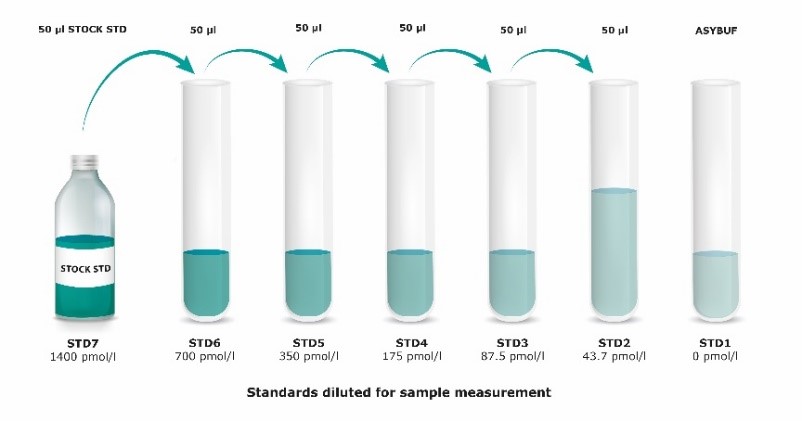 Reconstituted STOCK STD is stable at -25°C or lower until expiry date stated on the label.

Bring samples to room temperature and mix samples gently to ensure the samples are homogeneous. We recommend duplicate measurements for all samples.

Read the optical density (OD) of all wells on a plate reader using 450 nm wavelength (reference wavelength 630 nm). Construct a standard curve from the absorbance read-outs of the standards using commercially available software capable of generating a four-parameter logistic (4-PL) fit. Alternatively, plot the standards’ concentration on the x-axis against the mean absorbance for each standard on the y-axis and draw a best fit curve through the points on the graph. Curve fitting algorithms other than 4-PL have not been validated and need to be evaluated by the user. Obtain sample concentrations from the standard curve. If required, pmol/l can be converted into pg/ml by applying a conversion factor (1 pg/ml = 0.018 pmol/l; Mouse Angiopoietin-2 MW: 54.9 kDa). Respective dilution factors have to be considered when calculating the final concentration of the sample.

The quality control (QC) protocol supplied with the kit shows the results of the final release QC for each kit lot. Data for OD obtained by customers may differ due to various influences and/or due to the normal decrease of signal intensity during shelf life. However, this does not affect validity of results as long as an OD of 1.00 or more is obtained for the STD with the highest concentration and the value of the CTRL is in range (target range see label).

Angiopoietin-2 (ANG2) is a 56.9 kDa glycosylated growth factor that is specific for endothelial cells (ECs). ANG2 is expressed in embryonic vessels and contributes to the formation of new vasculature. In adults, it is restricted to sites of vascular remodeling (e.g. ovary, uterus, placenta) and wound healing. ANG2 is regulated by the cytokine vascular endothelial growth factor (VEGF). Together with VEGF, ANG2 induces endothelial cell migration, proliferation, and vascular sprouting. During angiogenesis, ANG2 exerts its effects via the angiopoietin-1/TIE2 receptor signaling system on endothelial cells. Disruption of this signaling leads to the loss of endothelial integrity. In consequence, the endothelium responds to various pro-inflammatory cytokines and growth factors. Thus, ANG2 might cause vascular micro-inflammation in patients with chronic kidney disease (CKD). Various studies demonstrated that ANG2 levels increase with CKD stage and are associated with fluid overload and abnormal cardiac structure. Furthermore, ANG2 concentrations correlate with mortality in patients with CKD stages 4–5. Although ANG2 levels recover after successful kidney transplantation, ANG2 continues to be a cardiovascular risk factor in this population.
In cancer, targeting the TIE2-Angiopoietin pathway has shown promising results in some pre-clinical and clinical trials, including studies on recurrent or metastatic breast and renal cell carcinomas.

The LOD, also called the detection limit, is the lowest point at which a signal can be distinguished above the background signal, i.e. the signal that is measured in the absence of mouse Angiopoietin-2, with a confidence level of 99%. It is defined as the mean back calculated concentration of standard 1 (0 pmol/l of mouse Angiopoietin-2, five independent measurements) plus three times the standard deviation of the measurements.

The LLOQ, or sensitivity of an assay, is the lowest concentration at which an analyte can be accurately quantified. The criteria for accurate quantification at the LLOQ are an analyte recovery between 75 and 125% and a coefficient of variation (CV) of less than 25%. To determine the LLOQ, standard 2, i.e. the lowest standard containing mouse Angiopoietin-2, is diluted, measured five times and its concentration is back calculated. The lowest dilution, which meets both criteria, is reported as the LLOQ.

The following values were determined for the Angiopoietin-2 Mouse/Rat ELISA:

The tables shows the summary of the recovery experiments in the Angiopoietin-2 Mouse /Rat ELISA in human samples:

The table below shows the mean recovery and range of serially diluted recombinant Angiopoietin-2 :

The table below shows the mean recovery and range of serially diluted endogenous Angiopoietin-2 in mouse and rat samples:

Competition experiments were carried out by pre-incubating mouse and rat samples with an excess of coating antibody. The concentration measured in this mixture was then compared to a reference value, which was obtained from the same sample but without the pre-incubation step. Mean competition was 98%.

Serum and plasma are suitable for use in this assay. Do not change sample type during studies. We recommend duplicate measurements for all samples, standards and controls. The sample collection and storage conditions listed are intended as general guidelines.

To provide reference values for circulating mouse and rat Angiopoietin-2, a panel of samples was tested.