The Rat NT-proBNP immunoassay is a 3.5 hour, 96-well sandwich ELISA for the quantitative determination of rat NT-proBNP in serum or plasma.

The Rat NT-proBNP ELISA kit is a sandwich enzyme immunoassay for the quantitative determination of NT-proBNP in rat samples.

Figure explaining the principle of a sandwich ELISA:

After a first wash step, which removes non-specifically unbound material, the conjugate (Streptavidin-HRPO) is added and reacts with the detection antibody. After another washing step, the substrate (TMB, tetramethylbenzidine) is pipetted into the wells.

The figure below shows a typical standard curve for the rat NT proBNP ELISA. The immunoassay is calibrated against recombinant rat NT-proBNP peptide:

Storage instructions: All reagents of the Rat NT-proBNP ELISA kit are stable at 4°C (2-8 °C) until the expiry date stated on the label of each reagent.
Instructions for use

Serum and plasma are suitable for use in this assay. Do not change sample type during studies. We recommend duplicate measurements for all samples, standards, and control.

Collect venous blood samples in standardized blood collection tubes. Perform serum or plasma separation by centrifugation according to supplier’s instructions of the blood collection devices. The acquired serum or plasma samples should be measured as soon as possible. For longer storage aliquot samples and store at -25°C or lower. Samples are stable for up to five freeze-thaw cycles.

Lipemic or haemolysed samples may give erroneous results. Samples should be mixed well before assaying. We recommend duplicates for all values.

Samples with values above STD7 (3200 pg/ml) can be diluted with ASYBUF (Assay buffer).

Bring all reagents to room temperature before use.

Preparation of the standard curve: 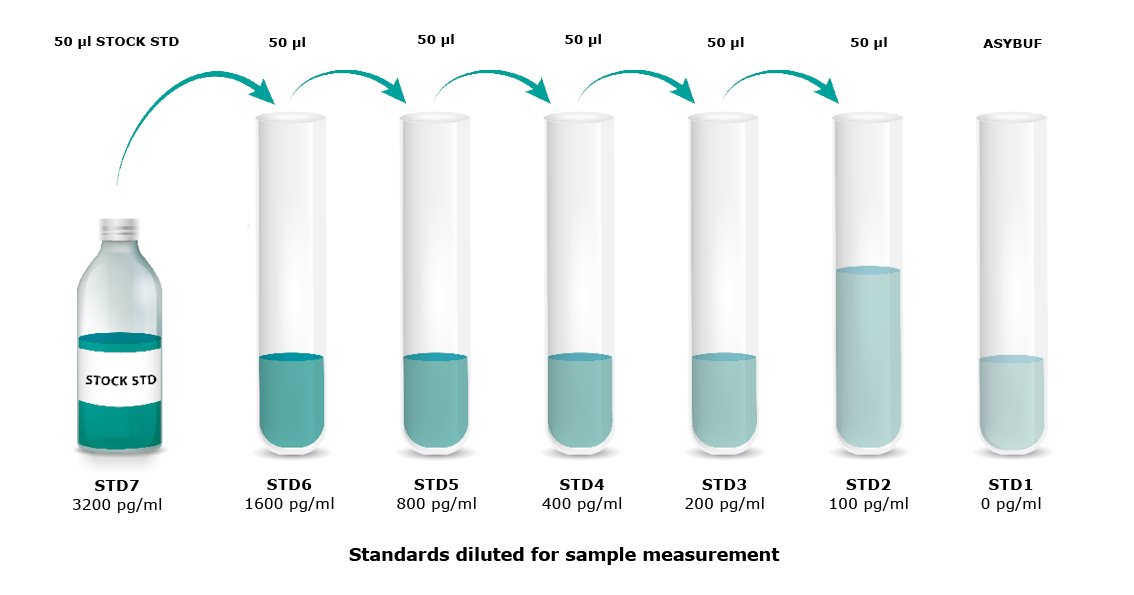 Bring samples to room temperature and mix samples gently to ensure the samples are homogenous. We recommend duplicate measurements for all samples. Samples for which the optical density (OD) value exceeds the highest point of the standard range (STD7, 3200 pg/ml) can be diluted with ASYBUF.

Read the optical density (OD) of all wells on a plate reader using 450 nm wavelength (reference wavelength 630 nm). Construct a standard curve from the absorbance read-outs of the standards using commercially available software capable of generating a four-parameter logistic (4-PL) fit. Alternatively, plot the standards’ concentration on the x-axis against the mean absorbance for each standard on the y-axis and draw a best fit curve through the points on the graph. Curve fitting algorithms other than 4-PL have not been validated and will need to be evaluated by the user. Obtain sample concentrations from the standard curve.

Samples with analyte concentrations outside of the calibration range of the assay (3200 pg/ml) should be diluted with assay buffer.

Concentrations of high-measuring samples that have been diluted during sample preparation must be multiplied by the dilution factor.

The quality control (QC) protocol supplied with the kit shows the results of the final release QC for each kit at production date. Data for OD obtained by customers may differ due to various influences and/or due to the normal decrease of signal intensity during shelf life. However, this does not affect validity of results as long as an OD of 1.0 or more is obtained for STD7 and the value of the CTRL is in range (target range see label).

BNP is mainly expressed by the ventricular myocardium in response to volume overload and increased filling pressure. It is synthesized and secreted by cardiomyocytes. Mature BNP consists of 108 amino acids (proBNP or BNP-108). ProBNP is cleaved during secretion in a 1:1 ratio resulting in physiologically active BNP-32 and the biologically inactive 76 amino acid NT-proBNP (http://www.uniprot.org/uniprot/P16860#PRO_0000001532). NT-proBNP (1-76) has greater plasma stability and a much longer biological half-life (90-120 minutes) than BNP, being considered as the preferred laboratory marker.

BNP has a key role in cardiovascular homeostasis with biological actions including natriuresis, diuresis, vasorelaxation, and inhibition of renin and aldosterone secretion. A high concentration of BNP in the bloodstream is indicative of heart failure.

The LOD, also called the detection limit, is the lowest point at which a signal can be distinguished above the background signal, i.e. the signal that is measured in rat NT-proBNP free sample (five independent measurements) plus three times the standard deviation of the measurements.

The LLOQ, or sensitivity of an assay, is the lowest concentration at which an analyte can be accurately quantified. The criteria for accurate quantification at the LLOQ are an analyte recovery between 75% and 125% and a coefficient of variation (CV) of less than 25%. To determine the LLOQ, standard 2, i.e. the lowest standard containing rat NT-proBNP, is diluted, measured five times and its concentration back calculated. The lowest dilution, which meets both criteria, is reported as the LLOQ.

The following values were determined for the rat NT-proBNP ELISA:

This table shows the summary of the recovery experiments in the rat NT-proBNP ELISA in different sample matrices:

The figure and table below show the mean recovery and range of serially diluted recombinant rat NT-proBNP in rat serum and plasma samples:

The figure and table below show the mean recovery and range of serially diluted endogenous rat NT-proBNP in serum samples: 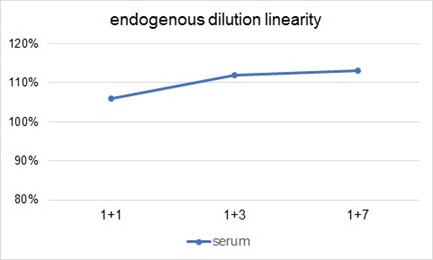 The stability of endogenous rat NT-proBNP was tested by comparing its concentration measured in samples that had undergone 5 freeze-thaw cycles.

Reference samples were freeze-thawed once. The mean recovery of sample concentration after 5 freeze-thaw cycles is 107%.

Samples can undergo up to 5 freeze-thaw cycles.

To provide an estimation of rat NT-proBNP values from apparently healthy rats we measured a small sample number of rat serum/plasma samples deriving from rat strains with different genetic backgrounds.  Rat NT-proBNP reference values may differ from other rat strains.

We recommended establishing the normal range for each laboratory.

Values of rat NT-proBNP in healthy rats and rats from kidney disease model adriamycin nephropathy (AN) and renal mass reduction (RMR) were measured.