Principle of the Assay

The leucine-rich alpha-2-glycoprotein (LRG) ELISA kit is a sandwich enzyme immunoassay for the quantitative determination of LRG in serum and plasma (EDTA, heparin, citrate).
A protocol for urine and cell culture supernatants is available.

The figure below explains the principle of the LRG sandwich ELISA:

In a first step, standards, controls and pre-diluted samples are pipetted into the wells of the microtiter strips, which are pre-coated with polyclonal sheep anti-human LRG antibody. LRG present in the standard/control/sample binds to the pre-coated antibody in the well. All non-specific unbound material is removed in a washing step and the detection antibody (CONJ, polyclonal sheep anti-LRG-HRPO) is pipetted into the wells. After another washing step, the substrate (TMB, tetramethylbenzidine) is added. The enzyme-catalyzed color change of the substrate is directly proportional to the amount of LRG present in the sample. This color change is detectable with a standard microplate reader. A dose response curve of the absorbance (optical density, OD at 450 nm) using the values obtained from the standards versus the standard concentration is generated.
The concentration of LRG in the sample is determined from the dose response curve. This sample concentration must be multiplied by the dilution factor used for sample preparation to obtain the final sample concentration.

The figure below shows a typical standard curve for the LRG ELISA assay. The immunoassay is calibrated against recombinant leucine-rich alpha-2-glycoprotein peptide:

Storage instructions: All reagents of the LRG ELISA kit are stable at 4°C until the expiry date stated on the label of each reagent.

Serum, EDTA plasma, and citrate plasma are suitable for use in this assay. Don’t change sample type during studies. We recommend duplicate measurements for all samples, standards and controls. The sample collection and storage conditions listed are intended as general guidelines.

Collect venous blood samples by using standardized blood collection tubes. Perform plasma or serum separation by centrifugation according to supplier’s instructions of the blood collection devices. Assay the acquired samples immediately or aliquot and store at -25°C or lower. Lipemic or haemolyzed samples may give erroneous results. Samples are stable for up to three freeze-thaw cycles. Samples should be mixed well before assaying. We recommend duplicates for all values.

Samples with values above STD7 (64 ng/ml) can be diluted with ASYBUF (Assay buffer) using higher dilution factor than 1:4000.

Note: the experiments performed to measure human LRG (leucine-rich alpha-2-glycoprotein) in urine samples did not undergo a full validation according to FDA/ICH/EMEA guidelines. However, our performance check suggests that urine samples can be measured with this ELISA. For more information please refer to the validation data.

Aseptically collect the first urine of the day (mid-stream), voided directly into a sterile container. Centrifuge to remove particulate matter, assay immediately or aliquot and store at -25°C or lower. Do not freeze-thaw samples more than four times. Thawed samples should be assayed as soon as possible.

Remove particulates by centrifugation and assay immediately or aliquot and store samples at -25°C or lower. Do not freeze-thaw samples more than five times.

Standards and Controls for Serum and Plasma Measurements

Reconstituted STDs and CTRLs can be stored at -25°C or lower until expiry date stated on the label. STDs and CTRLs are stable for three freeze-thaw cycles.

For the preparation of a cell culture-based standard curve always use the identical cell culture medium (CCM) as used for the experiment.

Attention: Supplied STD1-STD7 and controls are only valid for plasma and should not be used for cell culture measurements.

Bring samples to room temperature and mix samples gently to ensure the samples are homogenous. We recommend duplicate measurements for all values.
High measuring samples outside of the calibration range of the assay should be diluted in assay buffer.

Construct the standard curve from the OD values of the standards. Use commercially available software or graph paper.

Obtain sample concentrations from the standard curve. The assay was evaluated with logit-log and 4PL curve fitting algorithms.

Different curve fitting methods need to be evaluated by the user.

Follow the standard protocol as described for serum and plasma samples. Pipette 100 µl of undiluted urine sample directly into the well of the microtiter plate. If required, dilute samples 1+1 with assay buffer.

Attention: Concentrations defined for controls A and B are only valid for measuring LRG in human serum or plasma. The controls cannot be used for urine sample measurements.

LRG (leucine-rich alpha-2-glycoprotein) is a glycoprotein with a molecular mass of 38.2 kDa (https://www.uniprot.org/uniprot/P02750). It is encoded by the human gene LRG-1 which is mapped on chromosome 19 at the cytogenetic band 19p13.3. The protein LRG (or also named LRG1) runs at approximately 50 kDa under reducing conditions, as it contains a carbohydrate content of 23% (Haupt et al., 1977). LRG is present in serum, plasma and urine (Kharbanda et al., 2012; Kentsis et al., 2012). LRG is the founding member of the family of leucine-rich repeat proteins (Takahashi et al., 1985). The mature protein consists of 312 amino acids, from Val36 to Gln347, with a leucine content of 66 amino acids. It is folded to eight leucine-rich repeat (LRR) domains of 22 amino acid length, and a C-terminal LRRCT domain with 49 amino acid length (O’Donnell et al., 2002). Human LRG1 shows 62,5% sequence identity with mouse LRG1, and 60,7% with rat LRG1.

LRG binds to the TGFβ accessory receptor endoglin, and in the presence of TGFβ1 this leads to the induction of the TβRII-ALK1-Smad1/5/8 signaling pathway (Wang et al., 2013). TGFβ1 therefore promotes binding of LRG to the proangiogenic ALK1 but inhibits the interaction with angiostatic ALK5. Induced signaling leads to endothelial cell proliferation and blood vessel outgrowth (Wang et al., 2013).

Like many other family members of the LRG family, LRG is described to have multiple binding partners. LRG is described to directly interact with the mitochondrial electron transfer protein cytochrome c (Cummings et al., 2006), whereas the physiological relevance of this interaction in not known yet. LRG further binds to TGFβ1, the most frequently expressed TGFβ isoform.

Leucine-rich alpha-2-glycoprotein  (LRG) is involved in cell proliferations and immune responses, in cell migration, neovascularization and apoptosis (Zhang et al., 2016; Zhong et al., 2015; Wang et al., 2013). It is a proangiogenic factor which is involved in the regulation of the TGFβ signaling pathway. Upregulation of LRG is described in response to acute phase response in hepatocytes (Shirai et al., 2009). It is further upregulated in patients with inflammatory or neoplastic conditions (Kharbanda et al., 2012).

Tissue distribution of LRG is described to vary, with high-level expression in the liver, lower expression in the heart, and minimal expression in spleen and lung (O’Donnell et al., 2002). LRG is expressed during hematopoiesis. It plays a role in innate immune system as it is upregulated during neutrophil differentiation, packed into peroxidase-negative granules of human neutrophils, and secreted upon activation to modulate the microenvironment (Ai et al., 2008; Druhan et al., 2017). Differential expression of LRG is further associated with certain carcinomas, neurodegenerative disease, aging or autoimmune disease. Also, there is an association of cardiac remodeling (hypertrophy, fibrosis, abnormal vasculature, heart failure) and reduced expression of LRG (Pek et al., 2015; Song et al., 2015).

Up-regulation of the expression of leucine-rich alpha(2)-glycoprotein in hepatocytes by the mediators of acute-phase response.
Shirai R et al.Biochem Biophys Res Commun, 2009; 382(4): 776-9.

The LOD, also called the detection limit, is the lowest point at which a signal can be distinguished from the background signal, i.e., the signal that is measured in the absence of LRG, with a confidence level of 99%. It is defined as the mean back-calculated concentration of standard 1 (0 pmol/l of LRG, five independent measurements) plus three times the standard deviation of the measurements.

The LLOQ, or sensitivity of an assay, is the lowest concentration at which an analyte can be accurately quantified. The criteria for accurate quantification at the LLOQ are an analyte recovery between 75 and 125% and a coefficient of variation (CV) of less than 25%. To determine the LLOQ, standard 2, i.e., the lowest standards containing LRG, is diluted, measured five times and its concentration back calculated. The lowest dilution, which meets both criteria, is reported as the LLOQ.

The following values were determined for the LRG ELISA:

Within-run precision (intra-assay precision) was assessed by measuring two samples of known concentrations three times within one LRG ELISA lot by one operator.

This table shows the summary of the recovery experiments in the LRG ELISA in different sample matrices.

The figure and table below show the mean recovery and range of serially diluted recombinant LRG in several sample matrices: 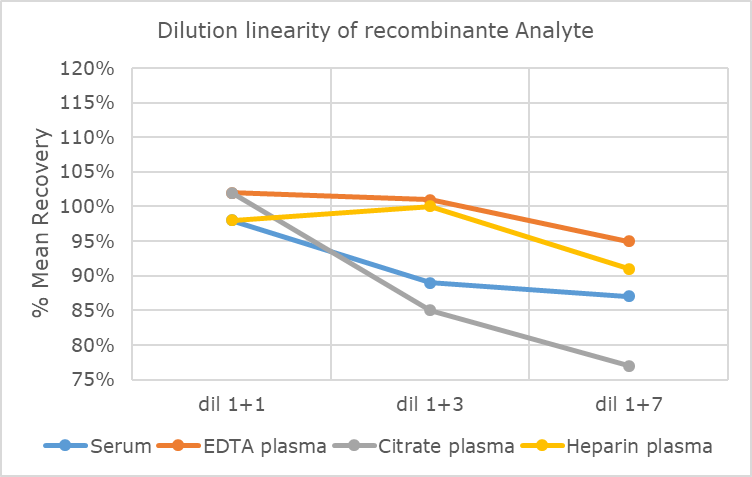 Characterization of the Antibodies

Antibodies were characterized by epitope mapping of linear epitopes with microarray technology and by the determination of binding kinetics with biolayer interferometry.

The peptide-specific coating antibody binds to a linear epitope in the N-terminal region of LRG. Multiple linear epitopes recognized by the polyclonal detection antibody are distributed over the whole LRG sequence and are located in the N- and C-terminus, as well as within the leucine-rich repeats. Both antibodies bind to LRG with low dissociation rate constants.

Competition experiments were carried out by pre-incubating human samples containing endogenous LRG with an excess of capture antibody (AB). The concentration measured in this mixture was then compared to a reference value, which was obtained from the same sample without the pre-incubation step.

Mean competition in serum and plasma samples was 99%.

There are no known isoforms of leucine-rich alpha-2-glycoprotein (LRG).

The LRG sequence similarity between human LRG with mouse, rat and pig is 64%, 64% and 71%, respectively.

The cross-reactivity of the human LRG ELISA with non-human samples was not tested.

Serum, EDTA plasma, heparin plasma, and citrate plasma are suitable for use in this assay. Do not change sample type during studies. We recommend duplicate measurements for all samples, standards and controls. The sample collection and storage conditions listed are intended as general guidelines

The stability of endogenous leucine-rich alpha-2-glycoprotein (LRG) was tested by comparing samples that had undergone five freeze-thaw cycles (F/T).

For freeze-thaw experiments, samples were collected according to the supplier’s instruction using blood collection devices and stored at -80°C. Reference samples were freeze-thawed once.
The mean recovery of sample concentration after four freeze-thaw cycles is 95%.

All samples should undergo a maximum of five freeze-thaw cycles.

Samples can be subjected to five freeze-thaw cycles.

The benchtop stability of endogenous leucine-rich alpha-2-glycoprotein (LRG) was tested by comparing LRG measurements in human samples that had been stored at different temperatures.
For the assessment of the benchtop stability, a set of undiluted human samples was aliquoted and stored at room temperature or at 4°C.
Samples can be stored for at least three hours at room temperature as well as overnight at 4°C. The mean recovery of sample concentrations after overnight storage at 4°C is 98%. 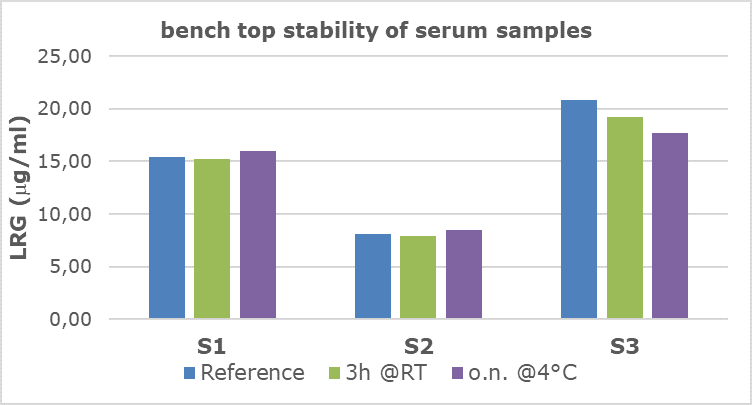 To provide values for circulating leucine-rich alpha-2-glycoprotein (LRG), a panel of samples from apparently healthy donors was tested.
Each individual donated blood for all tested sample matrices. 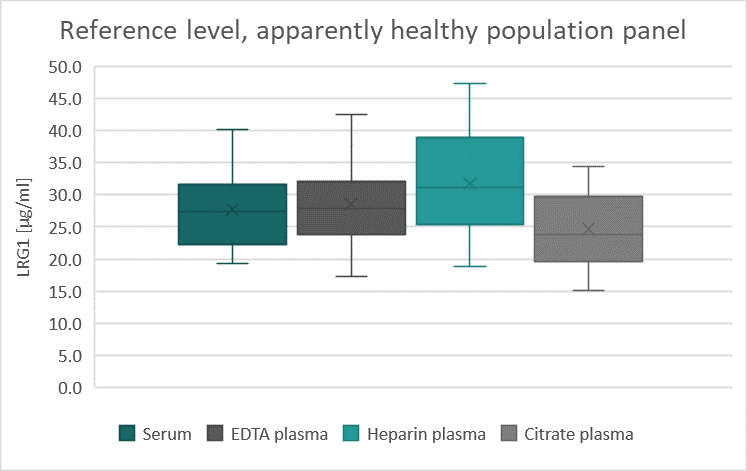 We recommended establishing the normal range for each laboratory. 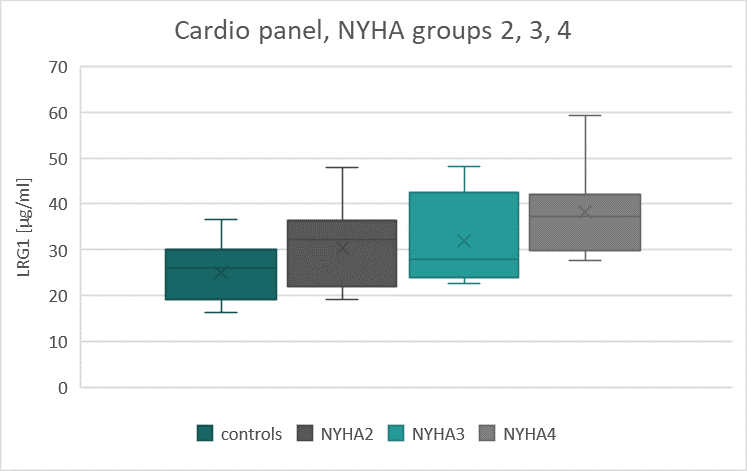 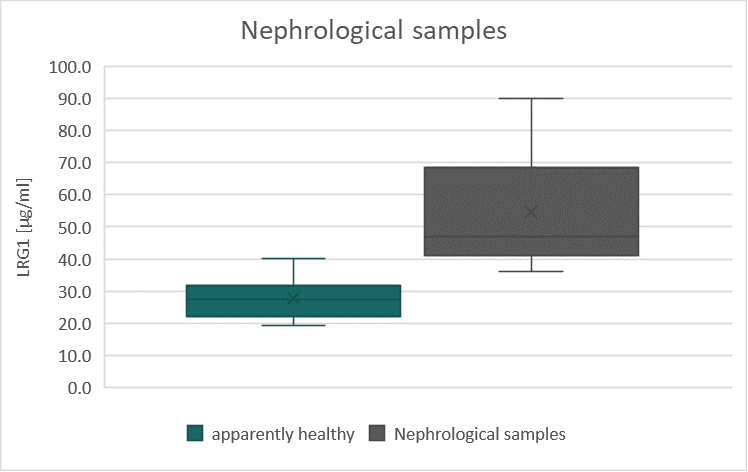 Summary of the results:

To assess whether all tested matrices behave the same way in the concentrations of leucine-rich alpha-2-glycoprotein (LRG) were measured in serum, EDTA, heparın, and citrate plasma samples prepared from 10 apparently healthy donors. Each individual donated blood in all tested sample matrices.

Data and graph for apparently healthy donors are shown below: 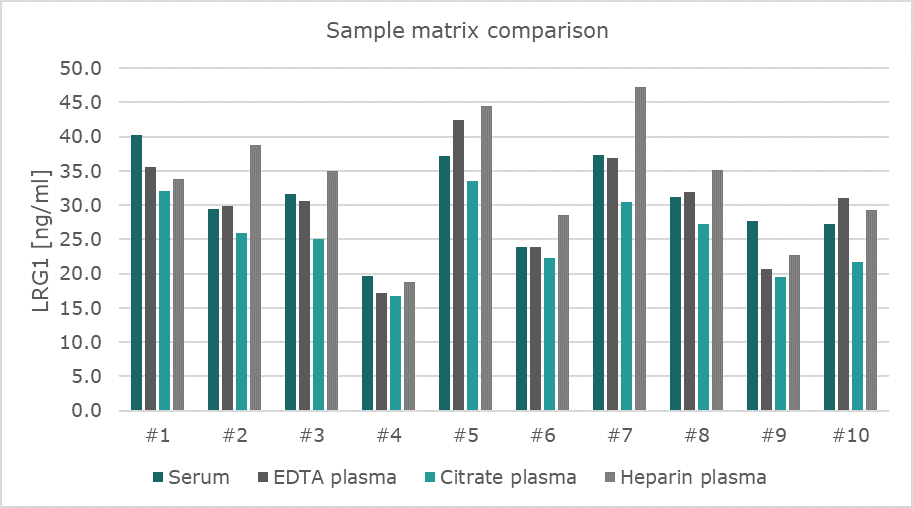