The FluoBolt™-NOGGIN immunoassay is a Metal Enhanced Direct Sandwich Fluorescence Immunoassay in 96-well plate format for the quantitative determination of NOGGIN in serum and plasma. The assay employs human based serum standards to ensure the measurement of biologically reliable data.

The FluoBolt™-NOGGIN immunoassay is a Metal Enhanced Direct Sandwich Fluorescence Immunoassay in 96-well plate format for the quantitative determination of NOGGIN in serum and plasma samples. 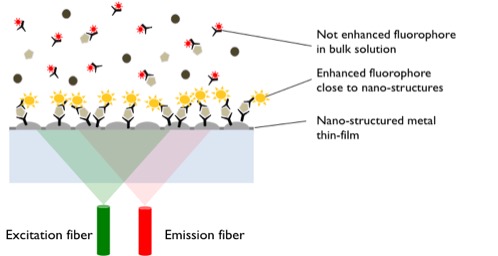 The signal of the bound fluorescent detection antibody is enhanced several hundred fold by the metal nano-structures at the plate bottom and thus highly sensitive detectable with a standard microtiter plate fluorescence reader. Measurements can either been done without washing (bottom measurement) or after a final washing step (top measurement). The concentration of NOGGIN in the sample is determined directly from the dose response curve.

The figure below shows a typical standard curve for the FluoBolt™-NOGGIN ELISA. The immunoassay is calibrated against recombinant full length NOGGIN: 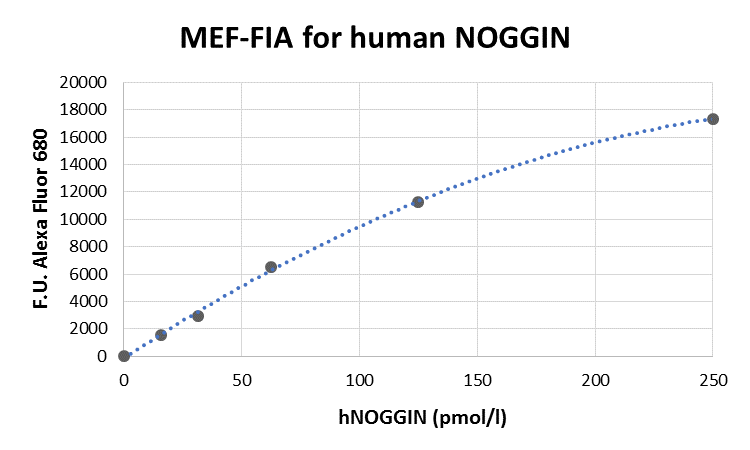 Storage instructions: All reagents of the FluoBolt™-NOGGIN immunoassay kit are stable at 4°C until the expiry date stated on the label of each reagent.

Collect venous blood samples by using standardized blood collection tubes for serum or plasma. We recommend performing plasma or serum separation by centrifugation as soon as possible, e.g. 10 min at 2000 x g, preferably at 4°C (2-8°C). The acquired plasma or serum samples should be measured as soon as possible. For longer storage aliquot samples and store at -25°C or lower. Do not freeze-thaw samples more than 4 times.

In standard format, the kit is delivered with an Alexa Fluor 680 labeled detection antibody (DAA) because serum background fluorescence is minimal within this wavelength range. Therefore if your reader is equipped with monochromatic optics, please set Excitation/Emission to 679/702 nm or if you are using an optical filter based reader, select a suitable filter pair (e.g. 670/720 nm). On request the kit can also be delivered with FITC, Cy3 or Cy5 (Ex/Em = 495/518 nm, 550/570 nm or 650/670 nm) labeled detection antibody

Noggin is a secreted homodimeric glycoprotein that is an antagonist of bone morphogenetic proteins (BMPs). Human Noggin cDNA encodes a 232 amino acid (aa) precursor protein; cleavage of a 19 aa signal peptide generates the 213 aa mature protein which contains an N-terminal acidic region, a central basic heparin-binding segment and a C-terminal cysteine-knot structure. Secreted Noggin probably remains close to the cell surface due to its binding of heparin containing proteoglycans. Noggin is very highly conserved among vertebrates.

Noggin predominantly binds BMP-4 and BMP-2 and antagonizes their bioactivities by preventing binding to both type I and type II receptors. During embryogenesis Noggin is a crucial factor for regulation of various developmental processes like formation of neural tubes, cardiomyocyte growth and patterning as well as skeletal development where Noggin prevents chondrocyte hyperplasia, thus allowing proper formation of joints. Mutations within the cysteine-knot region of human Noggin are linked to multiple types of skeletal dysplasias that result in apical joint fusions. Noggin is expressed in defined areas of the adult central nervous system and peripheral tissues such as lung, skeletal muscle and skin.

In adults NOGGIN may be associated with dissemination of tumor cells to bone, ankylosing spondylitis or pulmonary arterial hypertension (PAH). Its value as biomarker remains to be established yet.

To determine the sensitivity of the FluoBoltTM NOGGIN immunoassay, experiments measuring the Lower Limit of Detection (LOD) and the lower limit of quantification (LLOQ) were conducted.

The LOD, also called the detection limit, is the lowest point at which a signal can be distinguished above the background signal, i.e. the signal that is measured in the absence of NOGGIN, with a confidence level of 99%. It is defined as the mean back calculated concentration of standard 1 (0 pmol/l of NOGGIN, three independent measurements) plus three times the standard deviation of the measurements.

The LLOQ, or sensitivity of an assay, is the lowest concentration at which an analyte can be accurately quantified. The criteria for accurate quantification at the LLOQ are an analyte recovery between 75 and 125% and a coefficient of variation (CV) of less than 25%. To determine the LLOQ, standard 2, i.e. the lowest standards containing NOGGIN, is diluted, measured three times and its concentration back calculated. The lowest dilution, which meets both criteria, is reported as the LLOQ.

The following values were determined for the FluoBoltTM NOGGIN immunoassay:

Within-run precision was tested by measuring the same samples 3 times within one FluoBoltTM NOGGIN immunoassay lot. The experiment was conducted by one operator. Samples reading above the highest standard were diluted with the sample diluent provided in the kit .

In-between-run precision was assessed by measuring the same samples 3 times within multiple FluoBoltTM NOGGIN immunoassay lots. The measurements were carried out by one operator.

The accuracy of an FluoBoltTM NOGGIN immunoassay is defined as the precision with which it can recover samples of known concentrations.

This table shows the summary of the recovery experiments in the FluoBoltTM NOGGIN immunoassay (recovery was independent of sample type, i.e. serum or plasma.

The figure and table below show the mean recovery and range of serially diluted recombinant NOGGIN in human samples. Linearty did not differ between human serum and plasma:

This assay detects free, bioactive human NOGGIN, that is not bound to BMPs. Specificity was tested by titration of the serum based kit-calibrators with human recombinant BMP-2, -4 and -7. 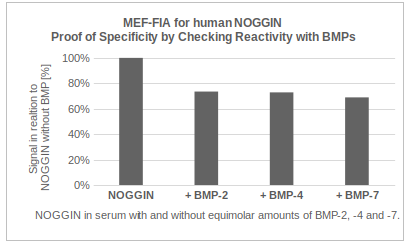 As can be seen from the chart, addition of BMPs reduces the signal of the calibrator, which demonstrates that the assay only detects free, bioactive NOGGIN.

This assay has been exclusively tested with human serum and plasma samples. No data are available for other species. However human NOGGIN shares 99%, 99%, 98%, 97% and 89% aa sequence identity with mouse, rat, bovine, equine and chicken NOGGIN. So using this assay for those species may be possible, but must be evaluated by the user.

The stability of endogenous NOGGIN was tested by incubation of clinical samples at room temperature for a specific period of time and by subjection samples to repeated freeze / thaw cycles.

For freeze-thaw experiments, samples were collected according to the supplier’s instruction using blood collection devices and stored at -80°C. Reference samples were freeze-thawed once. The mean recovery of sample concentration after five freeze-thaw cycles is 97%.

Samples can be freez/thawed for at least five times.

To provide expected values for circulating NOGGIN, a panel of samples from a collection of blood donors (aged 18-69 years) was tested.

No dependency on age, sex or sample matrix was found.

To assess whether all tested matrices behave the same way in the FluoBoltTM NOGGIN immunoassay, samples from individual donors collected in serum, EDTA, heparin and citrate plasma tubes were assayed:

A summary table of NOGGIN levels in various sample matrices is shown below:

NOGGIN values did not significantly differ between different sample matrices.