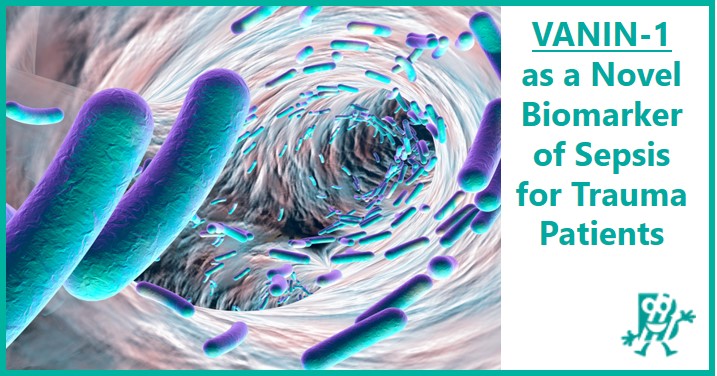 VANIN-1 as a Novel Biomarker of Sepsis for Trauma Patients

Sepsis is a life-threatening organ dysfunction and has become the main cause of in-hospital death in severe trauma patients. It is caused by an extreme response of the body to an infection. The early recognition of sepsis is critical for timely initiation of treatment and new biomarkers may help for early diagnosis.  Researchers recently investigated the use of Vanin-1 as a possible predictive biomarker of traumatic sepsis. The study demonstrated that Vanin-1 increased among trauma patients and was independently associated with the risk of sepsis, especially in the first 3 days after injury.

Introduction: Vanin-1 plays a pivotal role in oxidative stress and the inflammatory response. However, its relationship with traumatic sepsis remains unknown. The aim of our study was to evaluate whether plasma vanin-1 could be used for the early prediction of traumatic sepsis.

Methods: In this three-stage prospective cohort study, severe trauma patients admitted from January 2015 to October 2018 at two hospitals were enrolled. Plasma vanin-1 levels were measured by enzyme-linked immunosorbent assay (ELISA). The associations among variables and traumatic sepsis were identified by logistic regression models and the receiver operating characteristic (ROC) curve was analyzed to evaluate the diagnostic efficiency.

Conclusions: Our study demonstrated that plasma vanin-1 increased among trauma patients and was independently associated with the risk of sepsis. Vanin-1 might be a potential biomarker for the early prediction of traumatic sepsis.