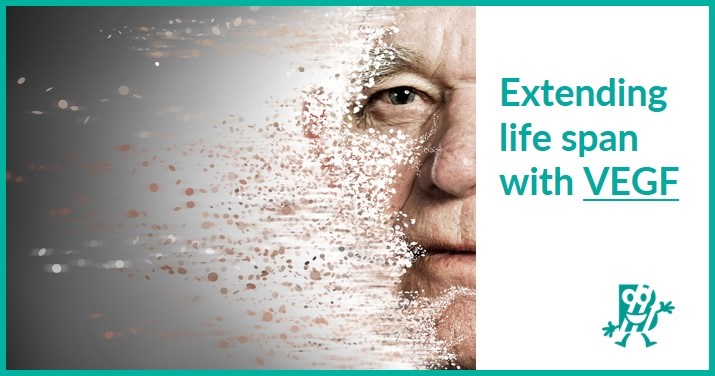 Vascular endothelial growth factor (VEGF) is a protein that stimulates the growth of blood vessels. A recent study in Science reports that VEGF signaling insufficiency in aged mice may be the driver of physiological aging in several organs. The researchers demonstrated that a modest increase of circulatory VEGF in “old mice” was sufficient to improve age-related effects and to extend their life span. View Abstract  .

INTRODUCTION
All body cells rely on blood vessels (BVs) for the provision of oxygen and other blood-borne substances and, in certain settings, also for the provision of endothelial-derived paracrine factors. Like other organ systems, the vascular system undergoes aging, which leads to progressive functional deterioration. Given the centrality of BVs to organ homeostasis, it has been hypothesized that vascular aging is an upstream, founding factor in organismal aging, but experimental support for this proposition is limited. Vascular aging involves both large and small vessels, with the latter marked by capillary rarefaction, i.e., age-related failure to maintain adequate microvascular density (MVD). A key homeostatic mechanism preventing MVD reduction relies on the angiogenic activity of vascular endothelial growth factor (VEGF), which by virtue of its hypoxic inducibility, constantly acts to replenish lost vessels and match vascular supply to the tissue needs. The reason(s) that VEGF fails to do so during aging is unknown.

RATIONALE
Compromised vascular function is expected to perturb organ homeostasis in ways conducive for the development of age-related frailties and diseases. Accordingly, counteracting critical facets of vascular aging might be a useful approach for their alleviation. The presumption that insufficient vascular supply in aging is underlined by VEGF signaling insufficiency, primarily (but not exclusively) because of its indispensable role in preventing capillary loss, led us to investigate whether securing a young-like level of VEGF signaling might rectify capillary loss and its sequelae. On the premise that deteriorated vascular function is an upstream driver of multiorgan malfunctioning, it is envisioned that its rectification might confer comprehensive geroprotection.

CONCLUSION
The study provides compelling evidence for the proposition that vascular aging is a hierarchically high driver of overall organismal aging. It places VEGF signaling insufficiency at center stage to multiorgan aging and suggests that its undoing might confer comprehensive geroprotection.

Check out our human VEGF ELISA – developed and manufactured by Biomedica

√ HIGH SENSITIVITY: measurable values in both serum and plasma

Poster: “Highly sensitive quantification of human VEGF with an ELISA”